Follow the Signs From the Universe… It Knows The Way

Have you ever had clear signs from the universe you needed to change your direction or travel plans?

Last year, I chased the crystal clear waters of Greece, literally did hours of searching and going to different islands.I was so excited to visit Symi. Pictures looked great, had a good recommendation so off I went, solo. When I arrived, it wasn’t what I expected. I ended up walking to a beach and just sat to absorb the atmosphere. I planned on staying a night at least but hadn’t booked accommodation because I’d begun realising how controlling I was with my travel and planning and was making a conscious decision to let go and work I’m trusting the universe to guide me.

I began searching online and for some where to stay but accommodation was showing up ridiculously expensive (way more than I’d budgeted for) or unavailable. I could feel my anxiety increasing and then, the strangest thing happened…

A worker renting sun lounges came to ask if I wanted one. I said no, I was ok with my towel on the beach, he made a comment like “what, you’re just going to sit on the rocky beach?” He looked at me strangely and walked away. I continued searching frantically for somewhere to stay. I lost my presence and the beauty of my surroundings. I became immersed in my phone looking for accommodation.

The man then came back a few minutes later and said his boss said if I didn’t want a sun lounge I would have to move away from the beach shore where the sun lounges were because if people saw me sitting on the beach they might not buy a sun lounge. I was super confused. It’s a beach. I can sit where I want… right?

Anyway, I said I’d move soon and continued with my accomodation search (by this stage almost in tears… or maybe had shed one or two). He left and returned a few minutes later. Then…

He picked up my bag and said I needed to move right now. I was shocked. Stressed. Couldn’t speak. Felt powerless. And I wish I took a photo of where he moved me to. Behind the rocky beach was a patch of dirt. He put my bag down there and I was in so much shock, I laughed. It’s all I could do. Was he joking? I wasn’t even on the beach anymore! I spoke up and moved closer to the beach. He was annoyed but moved away.

For me, being physically removed was like a slap in the face; a big enough sign from the universe I needed to move on from the island. I stopped searching accommodation but instead looked up what other ferries were coming and going from this small island that day so I could get out of there!

And that I did! I needed to get a ferry to Rhodes.

Everything about Rhodes was divinely orchestrated. A true blessing!

On the way to Rhodes, there were 2 hostels I was tossing up between. Mind you, I rarely stayed in hostels (mostly feared getting bedbugs but also feared strangers). I ended up booking Rodos Backpackers because it had smaller room sizes (less strangers I thought).

That night I went to dinner with some people from the hostel and all the dramas from the day felt insignificant. I was safe and happy!

The next day at the hostel I met Vesa. He offered to drive me around the island as he had hired a car. At first I was like 😳 no thanks (with my fear of strangers and all) but as we got chatting there was something comforting about his energy. I had a decision to make…

Next thing we know we were off! And I’m still here to tell the story. Vesa was an absolute God sent. So kind and caring. I remember we were chatting in the car and both said “it feels like we know each other or have met before”. Truly magical. For me, Vesa reminded me of my dad. He talked about his kids and his life in Finland. He was calm and inspired me with his passion for wanting to travel solo more and do more hiking. We visited the butterfly valley, beaches and another village, Lindos. We truly had the best day! 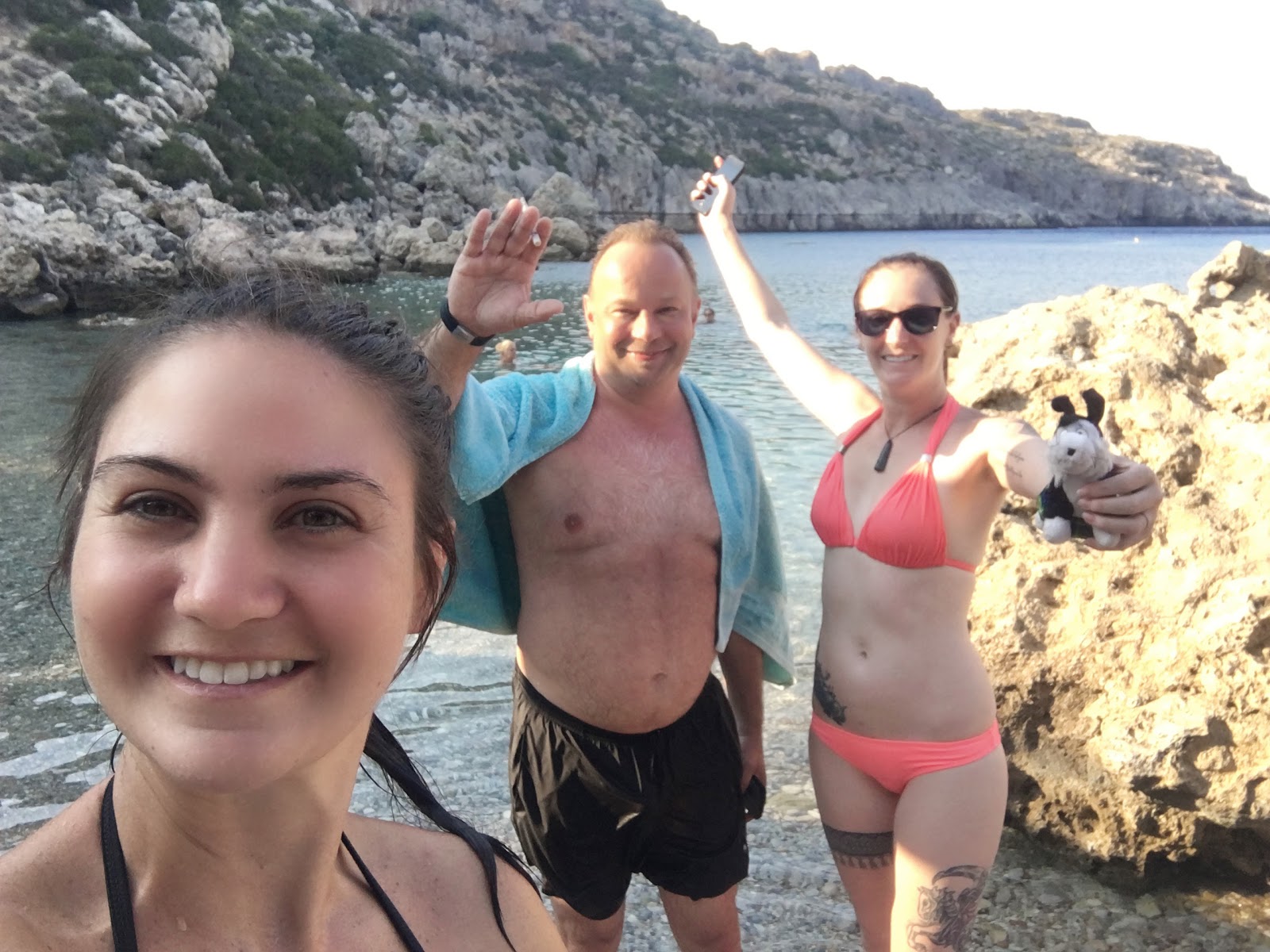 A few days later, Vesa had moved on but a girl Bridget arrived at the hostel. Bridget was super chill and calm. We got along so well and spent the day at the beach. We chatted about life and past experiences, we had so much in common! None of this ‘small talk’ business. We were having deep and meaningful conversations and then Vesa came and met us!

None of this would have been possible if I stayed in Symi, or if I let my fear of strangers take over my decisions or if I didn’t trust my intuition and stayed small. I’m not saying everyone is trustworthy but there are good people out there.

I am grateful to Vesa for breaking down my fear in strangers and showing me that it’s safe to travel solo and make friends and for Briget who was there when I needed a sister!

When have you seen signs from the universe that you followed and it led to something magical?

Control and the Beauty in Letting It Go